It’s a daunting time to be a professional science writer. Science, it seems, is working too well. As Carl Zimmer told an auditorium full of science graduate students, “It’s hopeless to cover it all, and it’s only getting worse.”

Or as an exasperated Ed Yong put it:

This point in the history of science represents an embarrassment of riches – exciting discoveries are made every day, but there aren’t enough people to take scientific reports and craft them into stories that non-scientists understand and actually want to read. As Zimmer told those of us gathered in the auditorium of Yale’s Peabody Natural History Museum, “Let’s not restrict the wealth to this room.”

There is, in fact, a world outside of our departments, and there’s a lot at stake out there.

Nearly half of Americans believe that humans were created in their present form by God within the past 10,000 years. The percentage of Americans who hold a hard-line Creationist view of the world has been flat for the past 30 years, despite major the gains science has made in understanding our human origin, including sequencing of the human and chimp genomes. The mounting scientific evidence that humans and chimps evolved from a common ancestor ~5-7 million years ago has failed to make those data points budge. Consequently, Americans still debate what place human evolution has in the classroom. Similarly, evidence of a 150-year trend in rising global temperatures hasn’t stopped people from pointing to a cold winter’s day as a refutation of climate change. 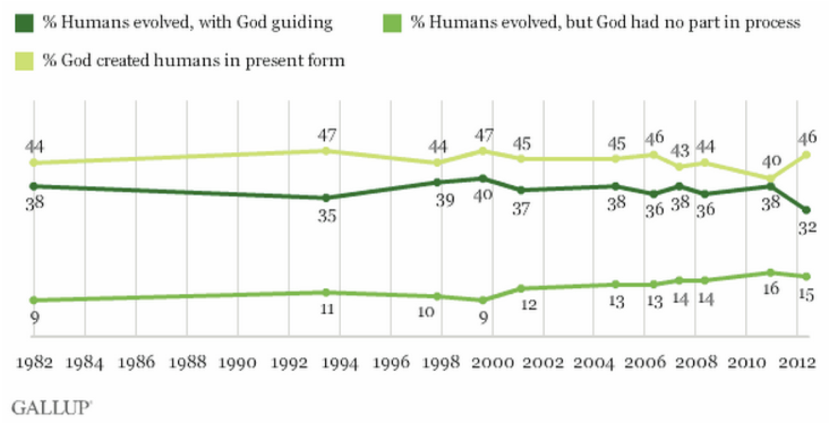 The public policy that will determine what we teach our kids and how we deal with climate change will hinge on whether or not voters understand the scientific method, or at least value scientific evidence. Scientists can’t afford to discuss amongst themselves and grumble about how the public doesn’t get it. Fortunately, if the attendance at Carl Zimmer’s writing workshop is any indication, scientists are looking to add their voices to the public discourse. If not to increase science literacy then, heck, to at least share the exciting things happening in their labs with family and friends. Scientists can chip in to cover “all the amazing papers”, lest Ed Yong sends himself to an early grave.

So great, we have scientists who are onboard and want to deliver science to the public. One problem: scientists, we’re told, are pretty bad at communicating science.

Or consider this quote about scientists-as-writers from Robert Kunzig from “Gee Whiz Science Writing” in A Field Guide for Science Writers:

It was sometimes almost sweet, how incompetent they were- how unable to offer a clear, logical account of their work that would be understandable and interesting to an intelligent layperson.

I read this passage on the eve of the writing workshop. It fell under the subheader “Don’t Be Afraid” and it was aimed at convincing science journalists that they shouldn’t be intimidated by egg-headed scientists. As an egg-headed scientist it left me feeling, well, intimidated at the prospect of a professional writer ever reading my own attempts at science writing.

But here was acclaimed science writer Carl Zimmer telling us that we too could learn to be effective writers. It would just require a bit of “deprogramming”. The thing is, scientists sometimes forget to speak English. As students we put in a lot of effort to learn the scientific language, or jargon, of our fields – terms like “synaptic plasticity” or “epigenetics” encapsulate a textbook worth of material. We embraced jargon because we earned the right to use it, and as Zimmer said it, we wanted to “sound like the grownups”.

Jargon is super convenient when experts wish to convey concepts quickly among themselves, but it’s also a sure-fire way to make the eyes of non-scientists glaze over faster than you can say “Krispy Kreme”. First and foremost, scientists need to dispense with scientific lingo when they write for the public. Some jargon is easy to spot, like “RNA interference”. However, scientists sometimes have “jargony” uses for everyday English words that are confusing to lay readers. I thought this table from “Communicating the science of climate change” by Richard Somervile and Susan Hassol was an eye-opener.

Instead of jargon, scientists should find metaphors that bring concepts to life and help readers get an intuitive sense of the science. A spot-on metaphor or figure of speech doesn’t exclude readers, but like jargon it quickly conveys a complex concept. Zimmer pointed out, “our brains are built for metaphors”. To avoid “in-speak” scientists need to place themselves in the mind of a non-scientist, which requires a forgetting of sorts. Think: what did words mean before science colored them? Zimmer keeps a running log of banned words in science writing that you can refer to. I’m guilty of relying on “forbidden” words like modulate and elucidate, among others.

Zimmer said he’s noticed that jargon is leaky, often seeping out into surrounding sentences. That is, scientists tend to write in overly formal language. A real-life example he used was the graduate student who wrote that flu spreads in “household settings”. Another bad habit of scientists is that they often use the passive voice. I think this happens for two reasons: 1) scientists are typically modest and sometimes feel like saying I or we did/found X sounds arrogant 2) scientists aim to be unbiased; when the passive voice is used in scientific articles it’s as if to say “any person who followed the stated protocol would have found the same results”. However, when passive voice creeps into non-academic writing, it can leave the reader with the impression that phenomena unfolded without any apparent cause.

Once a scientist unlearns his or her bad habits, the next step is to practice the craft of story building. Zimmer said that when we look at a beautiful piece of architecture, what we appreciate is how the craftsmanship at different scales work together. In writing, the craft starts with word selection and scales up to the paragraphs and overall structure of the story. Like a building, we can take apart the elements of a story and figure out how it was constructed and what makes it compelling. If you want to learn how to write a magazine article, reverse engineer a magazine article.

Zimmer said that before starting, you should be able to state your story in ten words or less. If you can’t, you don’t know what you’re writing about yet. The introduction should provide a road map for the journey you’ll take the reader on. The end of the story can look towards the future, “What are the implications if this finding holds up?” Stories, scientific ones included, are about people doing things – so bring the players to life. Also, writers should make sure to orient the reader throughout the story, especially if the piece jumps around in time. Finally, don’t be afraid to read your writing out loud. The most enjoyable writing flows naturally and takes on the cadence of speech.

Scientific trainees spend much more time wielding pipettes than wielding pens. Yet, the ability to write clearly for a lay audience is vital if scientists want to inform public opinion on issues ranging from food production to climate change. At a time of looming budget cuts, scientists need the support of the public. We should be seeking to communicate how our science can improve lives, whether that means finding new energy sources or simply providing people with a “gee whiz” science moment. We might need to unlearn some habits in order to do it, but scientists can help spread the wealth of science to the public.

Zimmer’s workshop laid out specific tools and guidelines to start the process, but it will take a lot of work from there. Luckily, as scientists we already possess something that’s key to good story-telling, and that’s enthusiasm. Former science editor for The Guardian Tim Radford wrote:

Most scientists start with the engaging quality of enthusiasm — to get through a degree course, the PhD and all the research-council hoops, you would need it…Enthusiasm is infectious, but to command an audience of readers, scientists should exploit their other natural gifts. One of these is training in clarity. Another is training in observation. And a third is knowledge.

I’ll keep these words in mind as I work to put Zimmer’s writing advice into practice.