At around 2 a.m. on Wednesday August 21st, a barrage of rockets exploded “like water tanks bursting” and released chemicals into two neighboring suburbs of Damascus. Still sleeping civilians inhaled these chemicals, and many never made it out of their beds. As reported by the New York Times, those who did arrived at hospitals, with “their bodies convulsing and mouths foaming. Their vision was blurry and many could not breathe.”

Hamish de Bretton-Gordon, the former commander of the chemical, biological and nuclear counter-terrorism unit at Britain’s defense ministry was quoted as saying, “If it is a chemical weapon, it’s most likely to be a nerve agent – and we know that sarin has been used in the past in Syria. We know that Assad has very large stockpiles of sarin, and a delivery of sarin would create these kinds of casualties.”

So what is the nerve gas, sarin, and what makes it so deadly?

Sarin is an organic compound that contains a carbon-phosophorous bond. Compounds like it are often used as insecticides and are extremely potent blockers of communication between nerves and organs.

Sarin, and other nerve agents implicated in the Damascus attacks (tabun, soman, and VX) block communication between nerves and organs by allowing the build up of a neurotransmitter called acetylcholine.

Sarin breaks this on-off switch by attaching itself to acetylcholinesterase, blocking its ability to break down acetylcholine. This allows it to build up in the space between the nerve and muscle and continuously stimulate muscle, leading to spasms and eventual paralysis. The same process simultaneously takes place at nerve-nerve cell junctions throughout the body: salivary glands are overactivated, causing hyper salivation and mouth-foaming; pupils constrict, impairing vision; and bronchial tubes squeeze shut, suffocating the victim. Sarin is devastatingly effective, and its symptoms line up with those reported for hundreds* of people in the Damascus suburbs.

For a short while, before supplies ran out, the victims were administered an antidote to sarin, called atropine. Atropine acts by competing with acetylcholine for binding to receptors on the muscle (or other nerve cell), while not activating the muscle or nerve cell itself. This gives the muscles and nerve cells relief from stimulation. 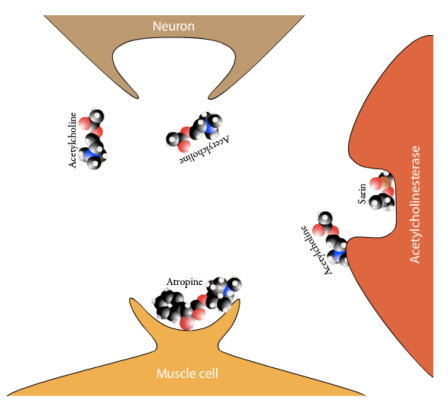 Unfortunately even if atropine is administered, sarin – particularly its effects on breathing – can have longterm negative consequences on brain function. There are fears that current atropine supplies are very limited, and that any existing stockpiles are likely controlled by the Syrian military.

Secretary of State of John Kerry has condemned the attacks as a “moral obscenity“, and the Los Angeles Times reports that Kerry’s emotional language may be an attempt to “build up public support for a muscular attack” on Assad’s forces.

*We now know the attack likely affected thousands, with the death toll at 1,429 as of 8/31