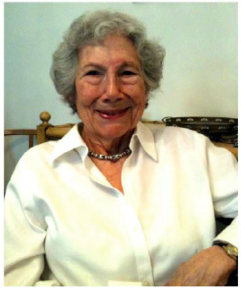 I was thrilled to hear the news that Dr. Evelyn Witkin won this year’s Lasker Award for her pioneering work in DNA damage response. Witkin started out as a biology student at NYU; originally planning to continue on at NYU for her graduate work she was “bounced out of college” her senior year for her role in protesting NYU athletics’ acquiescence to segregation in the South. Fortunately, her move to Columbia and then Cold Spring Harbor Laboratory was a turning point in her career (mind you, NYU didn’t even have a genetics department).

At CSHL, Witkin discovered a strain of bacteria that was immune to the damaging effects of UV radiation. This was the starting point for understanding the molecular pathways that regulate DNA damage and repair (which so often go haywire in cancer).

I first contacted Witkin in 2013, while I was trying to dig up information about another CSHL alum, Martha Chase. While Martha remained elusive, I got a broader sense of what it was like to be a female scientist at CSHL in the 40s and 50s (surprisingly good by her account). On top of being a top-notch scientist, it was evident from my correspondence with her that Witkin is a remarkably kind, I’d say graceful, person. I’ve included an email from her below to give you an idea.

I remember Martha Chase very well, as an attractive young woman who worked with Al Hershey, but I’m afraid I will have to disappoint you when I tell you that I really did not know her very well.   I don’t recall ever talking with her about the work she was doing with Al, either before or after the publication of their 1952 paper. We exchanged smiles and greetings when our paths crossed, which somehow did not happen very often.  Perhaps that was because by 1952, I was no longer living on the grounds at the lab, but across the harbor in CSH village.

I appreciate your interest in what CSH was like in the forties and fifties.  I will try to answer your specific questions as soon as I can, but it  occurred to me that you might want to read my memoir Chances and Choices: Cold Spring Harbor 1944-1955, which was published in 2002 in the Annual Review of Microbiology.  I have attached it here.  Perhaps you will find some of your questions answered there.  After you have had a chance to read it, it might be useful for you to send me an amended list of questions, which I will then be glad to answer as best I can.

I have to call your attention to an error in that article, which I discovered only after it was published.  In the list of future Nobel laureates that I met at CSH.  I mistakenly included O.T. Avery,  C. M. McCleod and M. McCarty.  I has assumed that the prize had been awarded to them, and was shocked to learn, that it had not.

I have always felt that i was amazingly fortunate to have been at the CSH Lab as a graduate student, postdoc and staff member, during those indescribable tears of ferment and promise.  I made my first visit there in 1943, which, if my arithmetic is right, is now seventy. years ago.  Yet I have vivid memories of so much that happened there, and of so many of the people who helped make molecular biology happen.  There was a shared excitement that made every day an adventurea

I’m sure that you must be having a wonderful experience in your graduate work in 2013.  Whenever I visit,  I sense that a lot of the magic that I remember is still there, on steroids.

Thank you for writing, Kristen.  Let’s keep in touch.